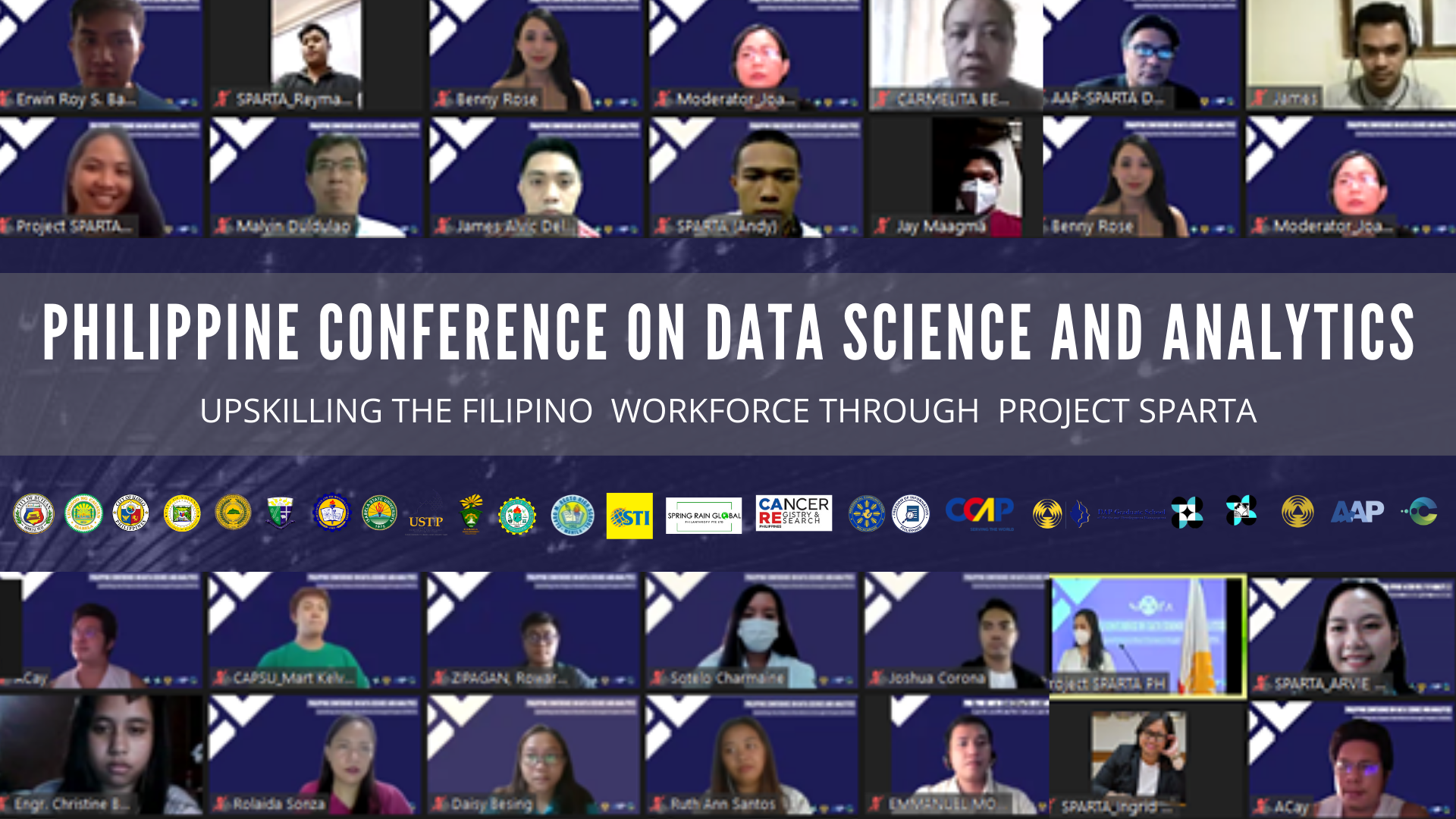 May 18, 2021- Project Smarter Philippines through Data Analytics Research and Development, Training and Adoption (SPARTA) recently held an online conference to celebrate its year one accomplishments, share insights from learners and partners, discuss career opportunities, and launch its Smart Governance Portal and Hackathons. Entitled, “Philippine Conference on Data Science and Analytics,” the event was conducted on May 12, 2021 via Zoom and Facebook live with the theme “Upskilling the Filipino Workforce through Project SPARTA”.

During her welcome remarks, Development Academy of the Philippines (DAP) Officer-in-Charge and Senior Vice President Magdalena Mendoza emphasized the importance of data in society by mentioning examples of its various uses. She also stated the goal towards the country’s knowledge economy and affirmed the contributions of the Department of Science and Technology (DOST) in paving the way to the said goal.

DOST Secretary Fortunato De La Peña mentioned the agency’s initiatives to further data science and analytics (DSA) in the country, including the creation of the SPARTA and its contribution to the country. He also encouraged more Filipinos to be part of the project and enjoined everyone to “look forward at looking at the different prospects where we can generate economic activities and added value with the use of these [data science and analytics] tools so that we can contribute to our economy.”

One of the accomplishments that the Project highlighted included the continuous increase in its applicants. According to Project Lead and DAP Vice President Dr. Alan Cajes, there was a fifty percent increase in the number of enrollment from year one’s 16,000 enrollees to the more than 25,000 enrollees in the second year of the project. He said that such achievement implies the increasing interest and participation of Filipinos in upskilling and reskilling themselves in DSA.

Dr. Cajes also talked about the other achievements which includes the launch of the completed Smart Governance Portal, partnerships, publication, and policy initiatives. He also mentioned the first completed SPARTA pathway that was launched on May 5, and stated that the team is targeting the completion of the remaining pathways and courses by June.

SPARTA also activated the hackathons planned for the upcoming months. The public and project scholars are encouraged to join the said activity to contribute meaningful solutions to society’s pressing problems.

Four panel discussions were also held, which talked about the experiences of SPARTA scholars, partnerships, career opportunities, and data ethics, respectively. A ceremonial Memorandum of Understanding (MOU) was then signed between DAP and SPARTA’s current and new partners composed of educational institutions, national and local government units, and other organizations.

In her closing remarks, DOST Undersecretary Rowena Guevara stated that the increased activity in the digital space of consumers is predicted to continue after the pandemic, and stressed the role of data scientists and innovators in the growth of the country’s digital economy. Aside from commending the project team and acknowledging program partners, she also reiterated the importance of hackathons and mentioned DOST’s GODDESS program. She then enjoined everyone to participate in these initiatives and continue serving the country.

Interested individuals who want to become SPARTA scholars can choose from the six pathways offered by the project. They should visit https://sparta.dap.edu.ph and https://coursebank.ph/sparta/ for the application process.